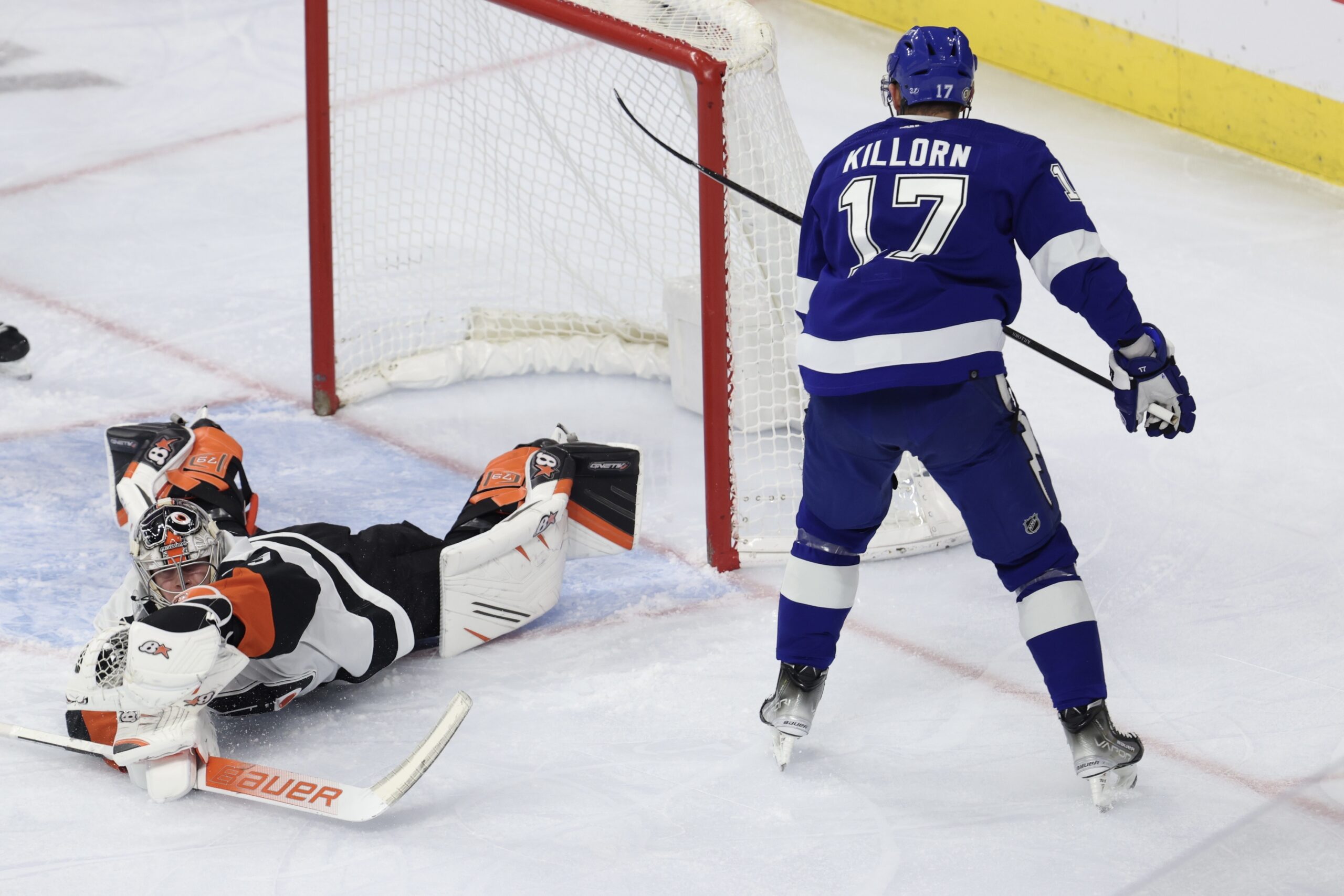 No winning streak was in store for the Philadelphia Flyers as they convincingly fell 4-1 to the Tampa Bay Lightning.

Two lucky bounces helped but the Lightning dominated through and through and the game could’ve been a lot worse than the scoreboard showed – courtesy of a Nick Paul brace. Carter Hart made 23 saves on 27 shots, Andrei Vasilevskiy made 21 saves and almost recorded another shutout had it not been for Travis Konecny’s late third period goal, and Steven Stamkos recorded his 1,000th career point.

The Flyers have now dropped 14 of their last 17 after Chuck Fletcher made an interesting comment today that the Flyers are only 5 points out of the Wild Card with their key players returning.

The Flyers, who finally snapped their 10-game winless streak, welcomed Scott Laughton back to the lineup last game and welcomed back Travis Konecny and Tony DeAngelo tonight. To make way for both players, Justin Braun was made a healthy scratch and Kieffer Bellows was waived earlier in the day. Owen Tippett, Morgan Frost, and Konecny represented the first line, Joel Farabee, Kevin Hayes, and Lukas Sedlak remained a trio, Scott Laughton was with Noah Cates and Zack MacEwen, and Nicolas Deslauriers was with Tanner Laczynski and Max Willman. On defence to start the game were Ivan Provorov and Rasmus Ristolainen, Travis Sanheim was seen with Tony DeAngelo, and Nick Seeler and Egor Zamula remained from last game.

It was an interesting start to this game as both teams looked slow, sloppy, and unorganized as they were missing passes, bumping into their own teammates, and turning it over far too much for the opposing team to fumble the opportunity.

The first shot of the game came at the 14:55 mark of the period from Tanner Laczynski, with the Lightning getting their first shot 2 minutes later from Victor Hedman with the rebound opportunity going to Alex Killorn, who was absolutely robbed by the glove of Carter Hart.

The Flyers’ Kevin Hayes and Scott Laughton forced a turnover on Brayden Point that led to Laughton finding Hayes all alone on Andrei Vasilevskiy but he made one too many moves and his shot went wide.

Things were relatively quiet until the latter third of the period when both teams started finding more room on the ice and were able to create something of substance.

Mid-period, John Tortorella placed Noah Cates in the middle of Hayes and Farabee and they almost broke the deadlock as Farabee intercepted a pass at his own blue line and skated up to near the blue line before passing to Hayes, who waited a little before sending a laser to Cates that was handled by Vasilevksiy moving post to post. Then on the next shift, Konecny had a great opportunity that went high and wide only for Frost to get an even better chance with a one-timer that was taken care of by the pad of Vasilevskiy. The Lightning took the puck the other way and were able to draw a penalty on Sanheim for a tripping minor.

Looking for his 1,000th point, Steven Stamkos’ rocket from his office hit the post with a minute remaining on the power play. Only 10 seconds later, courtesy of the second unit for the Lightning, they broke the deadlock after the Flyers fell back and allowed Corey Perry to set up shop behind the net as it bought him enough time to wait for Nick Paul to streak into the slot untouched.

HAD to do it to 'em 🤝 pic.twitter.com/Vga6mplPrt

The Flyers seemingly didn’t expect Perry to hold onto the puck for as long as he did because they didn’t even try to attack him, he waited for Paul who finished the play for his 10th goal of the season.

The Lightning entered the first intermission up by 1, and the Flyers held a 9-7 shot advantage as well as leading the hit parade by a total of 13-5.

The Lightning started the second period with 2 grade-A opportunities that Carter Hart tremendously kept out of the net as Tampa Bay really ignited the pressure in the first 7 minutes – Provorov was pinned on the ice and in his own end for over 3 minutes before being able to get off the ice while Ristolainen was on for about 4 minutes.

7:55 into the period, Paul scored his second goal of the game and 11th goal of the season on a very fortuitous bounce. Ian Cole received a pass from Stamkos behind the net and he then sent it in front to Paul. He shot the puck from the bad angle as it hit DeAngelo and apparently Paul and found its way past Hart. The bench for the Lightning emptied as Steven Stamkos recorded his 1,000th career point.

And there it is!

Steven Stamkos (@RealStamkos91) picks up an assist to give him his 1,000th NHL point and the @TBLightning pour off the bench! pic.twitter.com/lnu9EEVlgH

A few moments later, Patrick Maroon almost made it 3-0 as he tried whacking away at a loose puck in the crease as Hart made the initial save but DeAngelo came to rescue, going inside the net to cover the red line.

Rasmus Ristolainen was called for a holding minor on the next shift with 10:02 left in the period. The Flyers were under duress but were able to survive the penalty kill at the behest of several scoring chances fired towards Hart. During the second commercial break of the period, Tortorella had a chat with his team in his usual fieriness as they were being outshot 11-1 at that point.

With 6:39 remaining and the Flyers being outplayed, Zack MacEwen took an unnecessary minor penalty for interference. With 16 seconds remaining on the penalty kill, the Lightning were called for a hooking minor courtesy of Nick Paul. The Flyers did nothing with their best opportunity of the game to sustain any kind of pressure but they were stifled on the power play as they were stifled all period long.

Things only got worse as the Lightning took a 3-0 lead with 3.4 seconds left after a costly Egor Zamula turnover. Ross Colton finished off the rebound with no one around him as Corey Perry was tripped on his breakaway opportunity.

The Boss buildin' that lead pic.twitter.com/bA3RWpeo3k

The referees were going to call a penalty – maybe a penalty shot – but Colton took care of the garbage for his 5th goal of the season. The Lightning outshot the Flyers 17-2 in the period, were up 24-11 for the game, as they entered the final frame up 3-0 – the Lightning had more of their shots blocked (20) than the Flyers had on net (11).

With the Flyers finally sustaining a good amount of pressure, they were able to draw a penalty against Alex Killorn for hooking with 14:54 remaining in regulation. Nothing came out of it outside of a few shots that didn’t bother the goaltender – shocker.

With 10:41 left in the third period, Ian Cole’s centre-ice dump in bounced off the boards, towards the side of the net, over the skate of Hart and into the net for his second goal of the season – you really can’t make this stuff up at this point.

Upon his return to the lineup, Travis Konecny got the Flyers on the board with 8:37 remaining in the period. It was a play that started with Konecny letting the putting go through his legs and towards DeAngelo at the point, he then swung a pass to the other side towards Provorov, who then sent a laser of a pass back, cross-ice, to Konecny who was all alone and beat Vasilevskiy with a perfect shot for his 8th of the season.

The Flyers got their third power play attempt of the game after Cole was called for a roughing minor with 3:24 remaining. They recorded a shot on goal but it was just a formality and a way to kill 2 minutes off the clock as the game ended in a 4-1 victory for the Lightning.

They outshot the Flyers 27-22 but most importantly 24-11 in the first 40 minutes as they were able to ice the game with 4 seconds remaining in the second period after a costly Zamula turnover. Not that a 2-0 deficit would’ve changed anything, but it was something that really turned the tides even more.

The Flyers will host the New Jersey Devils on Saturday night looking to rebound from being totally outplayed by the Lightning.