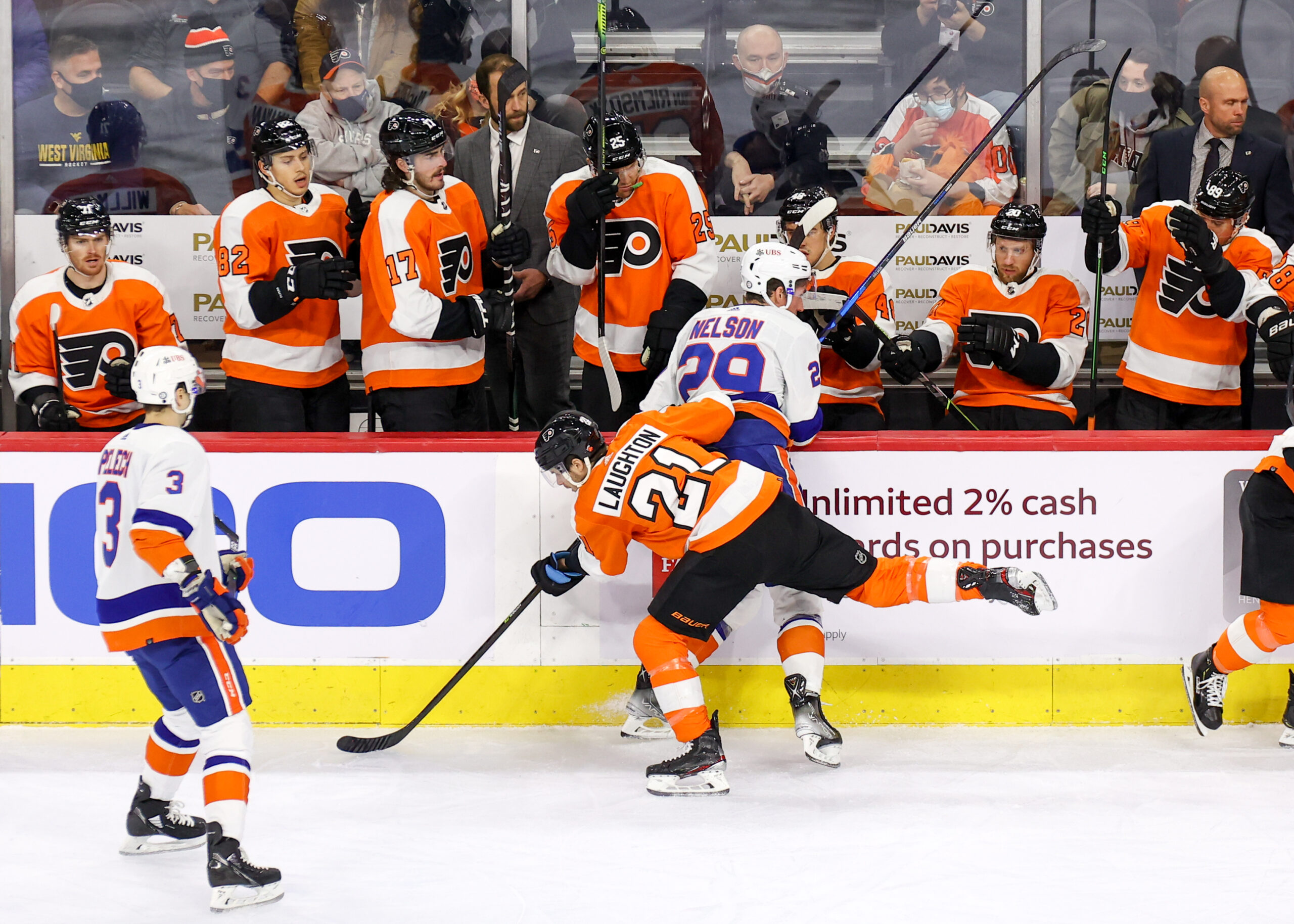 The Philadelphia Flyers, fresh in the middle of another 10-game losing streak, hope to reverse their fortunes tonight against the New York Islanders in the second leg of their home-and-home.

The Islanders capitalized on a strong third period effort on Saturday night at UBS Arena to trounce the Flyers 5-2 after trailing 2-1 earlier in the game. Lukáš Sedlák and Joel Farabee scored the two Philadelphia goals, but the Islanders got tallies from Adam Pelech, Brock Nelson, Anthony Beauvillier, and Zach Parise twice to sink the Flyers. Felix Sandström only stopped 18 shots in the loss, while Semyon Varlamov fended off 26 shots for New York.

The Flyers will get a little boost to their lineup tonight as forward Scott Laughton will return tonight after missing the last four games with a shoulder injury that he suffered back on November 19th in Montréal. Laughton has recorded three goals and four assists for seven points in 18 games this season for Philadelphia and has provided a spark with his physicality and defensive play as well, as is the norm for him.

While the Flyers will get Laughton back, defenseman Tony DeAngelo will miss tonight’s contest. He left morning skate early today and general manager Chuck Fletcher said that DeAngelo would meet with the medical staff and would be a game-time decision tonight, but ultimately he won’t be ready to play. DeAngelo painfully blocked a shot off his foot on Friday against Pittsburgh and briefly left the game, but he did return later on. DeAngelo played 21:25 against New York on Saturday and got in a fight with Oliver Wahlstrom, but he didn’t seem to be laboring much in the game.

Regardless of how they line up tonight, the Flyers need to dig in to get out of their slump. For what it’s worth, they did play a good game on Saturday despite the result. Philadelphia outshot the Islanders 28-23 and outside of the early start to the third period that featured two Islanders goals that ultimately sunk them, they showed compete and hustle. If they can get a couple more timely saves, stay out of the penalty box, and just capitalize on their chances, they could finally put an end to another ten-game losing streak.

– The Flyers have lost nine of their last ten games against the Islanders dating back to 2021. Philadelphia’s only win in those ten games came on March 20th, 2022 at home by a 2-1 score.

– Jackson Cates was sent to AHL Lehigh Valley to make room for Scott Laughton on the roster.

– Cam Atkinson will not play tonight but could play as soon as Thursday night against Tampa Bay.