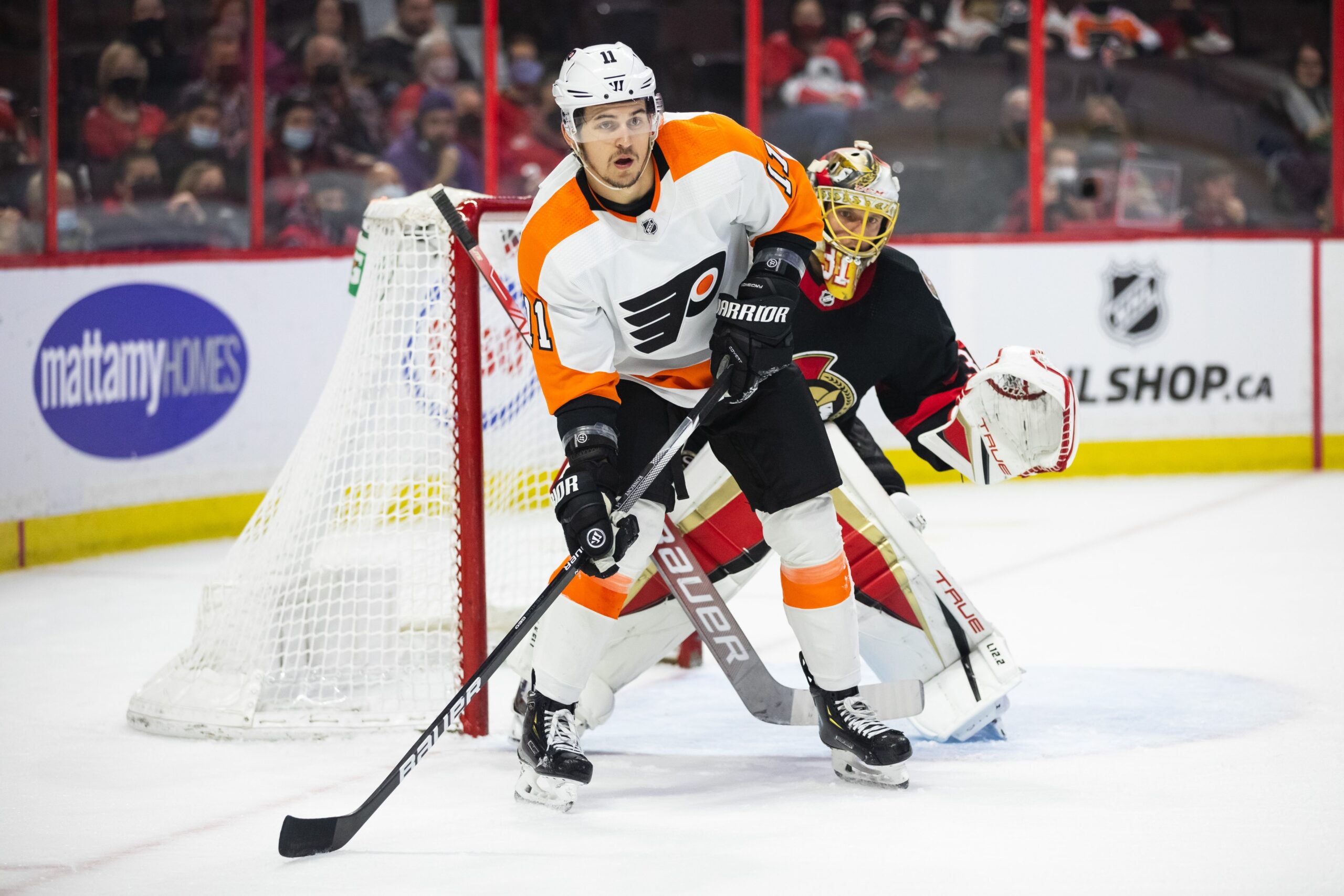 The Philadelphia Flyers flew into Ottawa with Claude Giroux being the sole absentee from their emotional win last night. They were visibly tired, weary, and slow as they weren’t able to muster up many chances against the lowly Ottawa Senators. Mike Yeo talked about how he has noticed the Flyers downplaying lesser opponents and playing big against the tougher ones and was hoping they would come to the forefront tonight. That didn’t happen and Giroux’s absence was extremely visible as they fell 3-1.

With the captain being a healthy scratch in anticipation of a trade, this was the first game in the Giroux-less era. With the Flyers having one more game before the Monday trade deadline, this could also be the last time we see Martin Jones tending the crease. Capping off an emotional comeback victory last night against the Nashville Predators, the Flyers found themselves in the Canadian capital to face-off against the Senators to finish off the back-to-back.

The Flyers were awarded an early power play but couldn’t find a groove, momentum, or zone entries to properly set up. With two units that are now missing a lot of firepower and are equal in skill and depth, it might take some time for someone to step up in Giroux’s absence. The game mellowed out very quickly after the successful penalty kill but the Senators tried changing that as they scored the first goal of the game at the midway point of the period.

Ivan Provorov banked the puck off the boards to get it out of the zone but it couldn’t reach a Flyers stick. The Senators corralled the puck at the neutral zone and quickly transitioned from defense to offense. Connor Brown tipped a pass to a streaking Alex Formenton and as both Flyers defensemen approached him, he quickly a made stop-gap move and dished the puck behind him to Tim Stutzle. He held onto the puck and moved into the face-off dot before ripping a snap-shot past a standing Martin Jones.

The Flyers power play was awarded an opportunity to tie things up shortly after but once again they weren’t able to create many scoring chances. They were in the zone, zipping passes around the perimeter but they weren’t able to get inside the danger areas to really trouble Anton Forsberg and Senators defense.

The Flyers and Senators swapped scoring chances before the period ended, but Rasmus Ristolainen was called for an interference penalty with a minute remaining, giving the 24th-ranked power play a chance to double their lead. The Senators had a few chances but they were blocked away, which seemed to be the theme of the first period as the Flyers blocked 11 shots. The Senators also outshot the Flyers 12-9.

After having a goal disallowed last night because of a Cam Atkinson high-stick, the budding forward legally deflected a Justin Braun-fluttered slap-shot from the point. Derick Brassard and James van Riemsdyk battled with a few Senators defensemen for the loose puck in the corner of the Flyers offensive zone. The latter found the loose puck behind the net and sent it off the boards to Braun at the point. He didn’t fully connect on the blast, which might’ve actually helped Atkinson find the puck and bat it in mid-air.

Cam Atkinson scores his 23rd of the season to tie it! pic.twitter.com/PKX0Rwwuif

With both teams missing key players and both sitting at the bottom of the standings, this game was as mundane as you could’ve imagined. The second period, especially after the tying goal, lulled for the most part. There were a few scoring chances for both teams with Ottawa having the best chance. They forced a turnover against Kevin Hayes in the offensive zone and quickly transitioned on an odd-man rush but Austin Watson’s one-timer was well tracked by Martin Jones. By the end of the second period, the Senators continued to outshoot the Flyers by a margin of 24-18 overall and 13-9 in the second.

Things finally got chippy midway through the third period as Brady Tkachuk and Rasmus Ristolainen got into a scrum after a Martin Jones save and cover-up. Tkachuk was playing his usually snarly game so it was bound to happen at some point. They were both called for roughing penalties, and that 4 on 4 finally opened things up a little as both teams shared odd-man rush opportunities. Justin Braun and Alex Formenton were also called for coincidental minors with 30 seconds left in the Tkachuk and Ristolainen penalties. 13 seconds later Morgan Frost was called for a hooking penalty, which put the Senators on an abbreviated 4 on 3 power play.

It only took the Senators 32 seconds to cash in on their power play opportunity as Josh Norris blasted a one-timer past Jones to give them the lead with half a period remaining. With Ristolainen racing from the penalty box, he had a chance to clear the puck out of the zone but ended up getting tangled with Stutzle as he got possession of the puck and sent it back to the point. Norris and Erik Brannstrom played a quick give-and-go and the former blasted his shot past Jones.

With the Senators up by one and having already connected on the man advantage, Patrick Brown was called for a tripping penalty with 6:02 remaining. The Senators had a 71-39 shot attempt advantage by this point of the game and a 33-22 shots on goal advantage. The Flyers killed it off with relative ease and with 3:27 remaining they were awarded a power play of their own to salvage the game. The Flyers were 0 for 3 on the man advantage already and weren’t able to muster up many chances, truly missing Claude Giroux’s presence.

Early in the power play the Flyers pulled Jones for the extra attacker as they attempted to tie the game with a 6 on 4 advantage. With 1:11 left on the power play and 2:38 in the game, Alex Formenton found a loose rebound behind the net and sent one the entire length of the ice into the empty net and essentially iced the game at 3-1.

After taking a timeout, the Flyers pulled Jones again with Cam Atkinson being robbed twice, once by Forsberg and another by hitting the side of the net. That was early enough after the timeout for the Flyers to potentially have a shot at tying the game had Atkinson finished off the chances, but Forsberg came up huge, earning himself a standing ovation from the home faithful.

The Flyers will head home to host the New York Islanders on Sunday in Philadelphia for a divisional afternoon matchup.