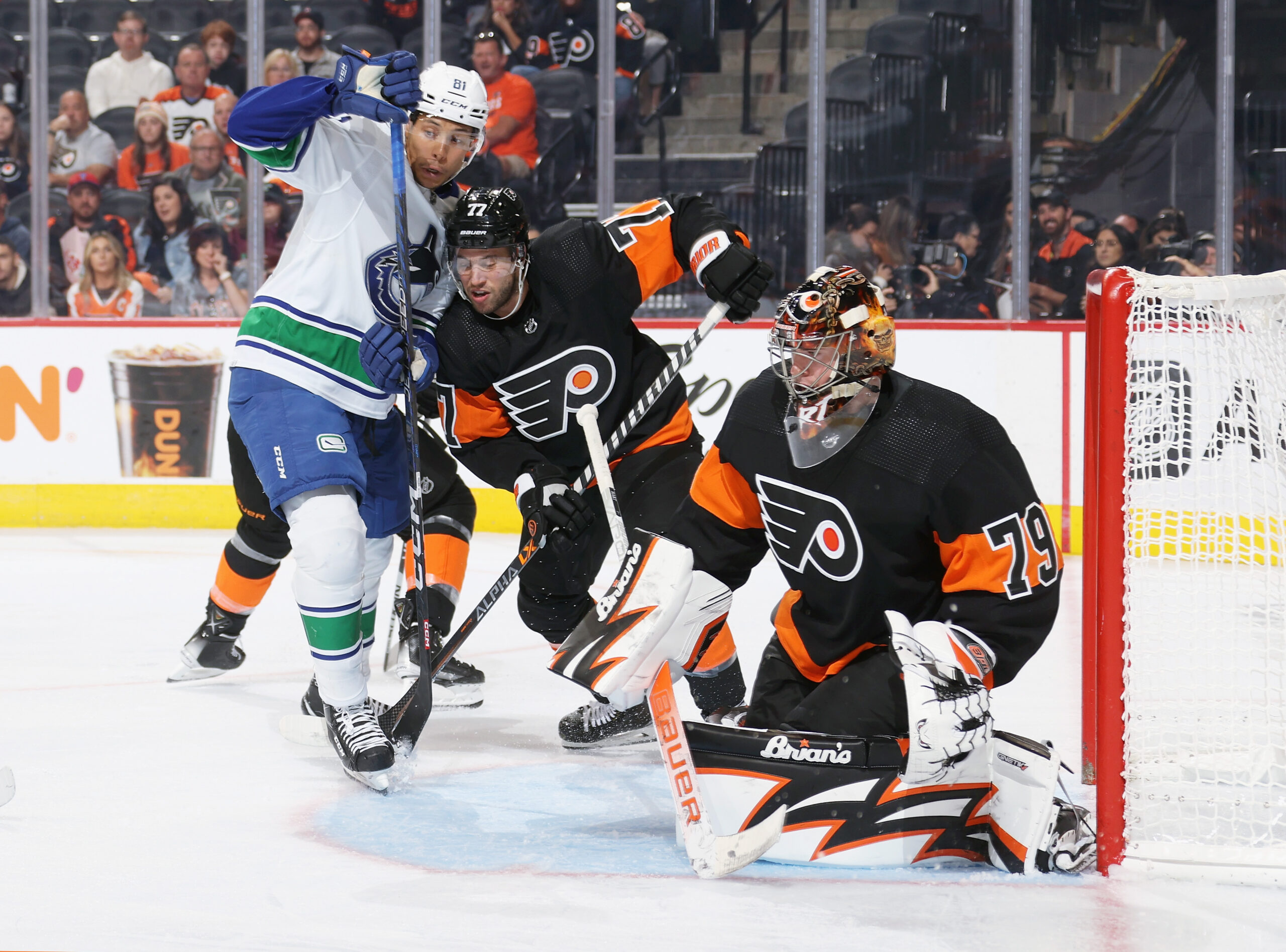 Flyers Come Back After Trailing 2-0, Win For Second Time in Two Games

The Philadelphia Flyers defeated the Vancouver Canucks 3-2 on Saturday, with goals coming from Tony DeAngelo, Scott Laughton, and Travis Konecny. Carter Hart was solid in the second half of the game, stopped 27 shots altogether, and shut the door after allowing 2 goals on his first 3 shots. DeAngelo scored his first as a Flyer on the power play, Laughton tied it up while shorthanded, and Konecny iced the game late to give the Flyers their second win in as many games.

With Hayden Hodgson being placed on waivers and reporting to the Lehigh Valley Phantoms, and Owen Tippett being placed on IR after his collision with Ondrej Palat on Thursday night, the Flyers recalled forwards Olle Lycksell and Jackson Cates who are both stationed on the fourth line alongside Nicolas Deslauriers for today’s affair with the Canucks.

In relation to all these moves, Tanner Laczynski, who was in the middle of the fourth line last game, got promoted to the third line and placed on the wing with Morgan Frost down the middle and James van Riemsdyk opposite him.

It only took the Flyers 20 seconds to get a scoring chance as Wade Allison was robbed in the blue crease by Thatcher Demko. Joel Farabee’s initial shot let out a juicy rebound, but Demko was able to recover and recover quickly for a huge stop to start the game.

The Canucks opened the scoring just 1:34 into the game off the stick of Kyle Burroughs as he entered the offensive zone and ripped a shot top shelf that mystified Carter Hart – who might’ve gone down a little too soon again. Nick Seeler gave Burroughs a little too much room and didn’t necessarily do enough to keep the puck at bay, but nevertheless it was a great shot and an early deficit for the Flyers.

Only a minute later, James van Riemsdyk was called for a holding minor, giving the Canucks an early opportunity to take a 2-0 lead.

The Canucks’ penalty didn’t last long as J.T. Miller hooked Kevin Hayes after turning over the puck near the blueline. The Flyers effectively wasted and killed an extra 30-40 seconds with Hayes taking the puck all the way back into his own zone and then starting a rush with the extra attacker, giving the Flyers almost 100 seconds of power play time.

They controlled the puck for most of the abbreviated power play in the offensive zone but weren’t able to muster up any shots as their passes were far from being crisp.

Coming out of the first commercial break, the Flyers were then awarded another power play after the Canucks were called for too many men on the ice.

Once again, there was not much coming out of the man advantage but with 2 seconds remaining in the penalty, the Canucks were called for another minor, this time a hooking penalty for Tanner Pearson. After a flurry of power plays, the Flyers came out 0 for 3 with very few scoring chances.

With 5:48 left in the period and on their third shot of the game – their first since the Burroughs goal – Conor Garland had all the time in the world to rip a snap shot past Carter Hart to make it 2-0 for Vancouver. A lot of pressure was being placed on Vasily Podkolzin, which allowed Garland to streak into the zone untouched and unmanned and beat Hart blocker-side, who was a little too aggressive in trying to save that one.

In a period that was predominantly controlled by the Flyers due to offensive zone time and 3 power plays, it was Vancouver who entered the first intermission up by 2 even though they were trailing 14-4 on the shot clock.

The second period started a little tentatively even though the Flyers kept adding to the shot clock. There were a lot of chances from the outside and not many that were really threatening Demko.

The best chance to start the period came off Elias Pettersson’s stick as he was robbed by a sprawling Carter Hart after a Travis Konecny turnover behind the net. Fortunately the Flyers were awarded another power play, this time a minor for high-sticking as the Flyers were looking to finally cut into their deficit.

Scott Laughton, who had the only scoring chance on the first 3 power plays, had another golden opportunity after a Morgan Frost end-boards pass set him up to score, but Demko stretched out for the big save. Once again, the Flyers only mustered one shot while up a man as the deficit remained at 2.

Luke Schenn was then called for an elbowing minor with 9:43 remaining in the second period, giving the Flyers their 5th power play of the game and looking for some kind of a spark. Fortunately, the Flyers finally connected on the power play off the stick of Tony DeAngelo for his first goal as a member of the Orange and Black.

TONY DEANGELO SCORES HIS FIRST GOAL WITH THE FLYERS pic.twitter.com/SmGWskznoA

It only took them 15 seconds to score but it was a simple play from the point, a shot with traffic in front of Demko with Konecny and van Riemsdyk in and around the blue paint. DeAngelo’s shot went through all that traffic and top shelf, cutting the deficit to one with about half of the game remaining.

With the game getting a little tighter than how it began, chances were beginning to get scarce and unfortunately the Flyers’ Olle Lycksell was called for a tripping minor with 3:52 remaining in the second frame. Similar to the Flyers’ first four power plays, the Canucks weren’t able to muster up much of anything and things only got worse for them as Scott Laughton found himself all alone after a perfect bank pass by Konecny set him up.

Laughton made no mistake with a top shelf snap-shot over the glove of Demko to tie the game.

Scott Laughton riding the Phillies' momentum across the street. pic.twitter.com/E78qnBj7de

With 29 seconds remaining in the period, Wade Allison was called for a hooking minor just moments after setting up Kevin Hayes with a scoring opportunity in the slot. In the dying seconds of the period, Elias Pettersson had another scoring chance and just like the first time, Carter Hart was able to shut the door on his goal-mouth chance.

The Canucks entered the third period with 1:31 of power play time but just like the other three opportunities, it was filled with dangerous passes and not many shots towards Carter Hart.

However, they carried some momentum off the power play as the following two shifts created four scoring chances off the sticks of Kyle Burroughs, J.T. Miller, and two from Brock Boeser – the first two being stopped by Hart and the latter two chances being blocked away.

After an early 16-4 edge in shots for the Flyers, the Canucks held the advantage with 17 to the Flyers’ 9 and with the game still tied at 2, the Flyers’ Justin Braun was called for a tripping minor. It was another quiet power play with the exception of an Andrei Kuzmenko shot on goal from the slot after Provorov and DeAngelo fumbled on the clearing attempt.

James van Riemsdyk, not known for his bodychecking, was called for a coincidental roughing minor alongside Riley Stillman after delivering a body check that frustrated the Canucks and created a scrum at the midway point of the third period.

The 4-on-4 opened up the game a little more as the Canucks created a few dangerous chances, while the Flyers held onto the puck a lot longer in the offensive zone but were kept to the outside. On a line change, Konecny dumped the puck into the zone with Deslauriers chasing and after delivering a hard body check he dropped the gloves with Kyle Burroughs and decisively won the bout – his first as a member of the Flyers.

Nicolas Deslauriers lays a large hit on the forecheck and Kyle Burroughs doesn't approve, so a scrap ensues#FueledByPhilly #Canucks pic.twitter.com/AUP3XNW2aw

After an offensive zone faceoff win, Tony DeAngelo’s shot hit Konecny and the Canucks failed to clear as the puck found Provorov on the other end of the blueline, his shot skipped over the stick of J.T. Miller and found Konecny, who had just gotten up after blocking the DeAngelo shot and was able to wrap one around Demko for a late 3-2 lead.

With 1:58 remaining in regulation, Laughton was called for a hooking minor and the Canucks pulled the goalie for the extra attacker. Miller started the power play with a snap shot that was gobbled up by Hart, then Quinn Hughes had a slap-shot that was stopped, Elias Pettersson missed on a one-timer, and then Bo Horvat was robbed in the slot after being beautifully set up by the umbrella.

With eight seconds left in the game, DeAngelo cleared the puck to ice the game as Hart came up huge yet again at the end of the game after allowing some soft goals to start.

The Flyers head on the road to face the Tampa Bay Lightning on Tuesday as they embark on their first road trip of the season.

Atkinson, Ristolainen remain out as Flyers host Canucks
Ristolainen Placed on IR, Belpedio and MacEwen Called Up, Back-to-Back on Tap Next