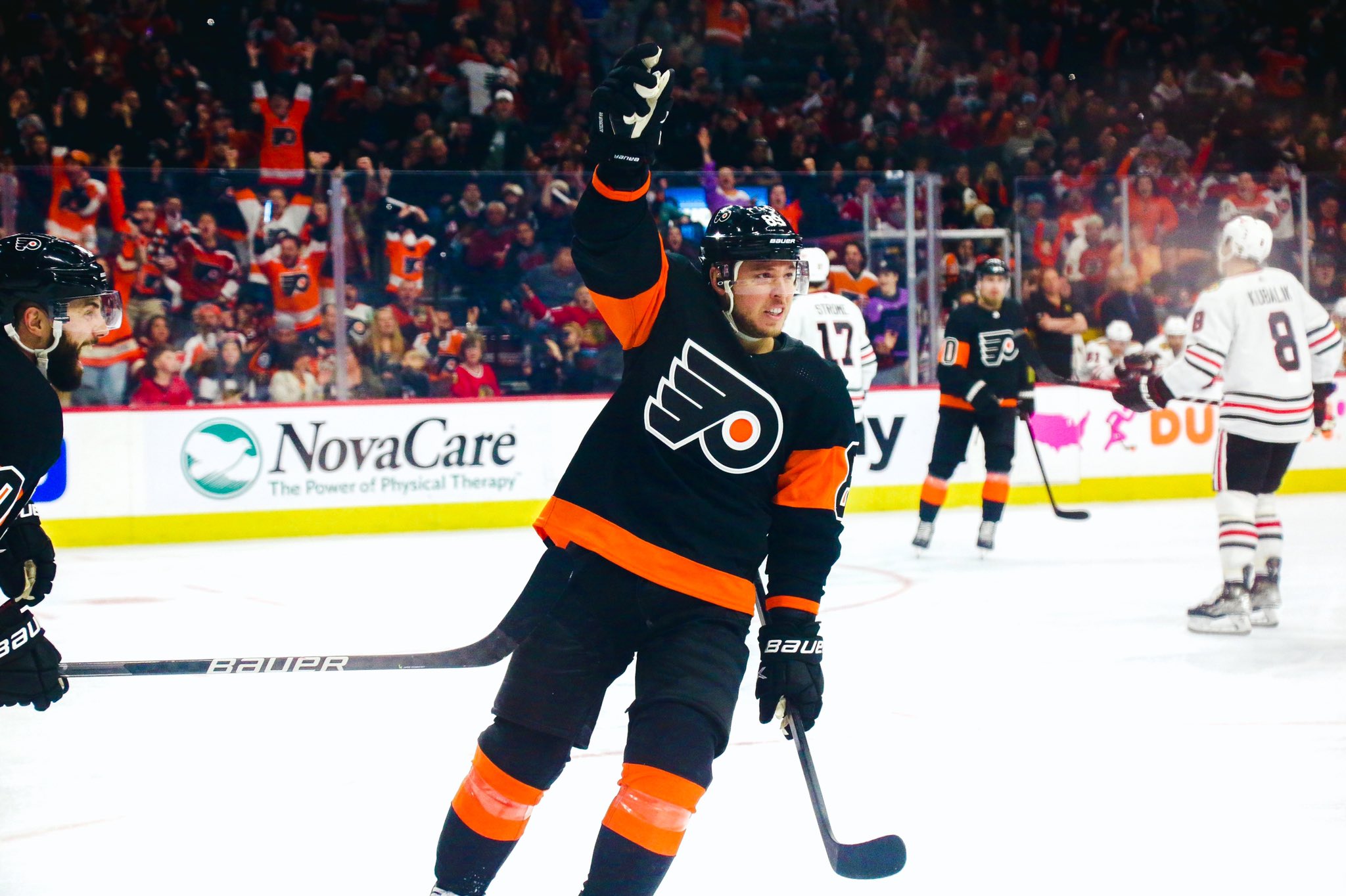 After losing a heartbreaker on Thursday against the Minnesota Wild, the Philadelphia Flyers were able to rebound and defeat the Chicago Blackhawks in front of a packed crowd at Wells Fargo Center in a nationally televised affair. It was a see-saw game all day long but the Flyers persevered and held on in the third period to seal the deal.

The Kevin Hayes effect appeared to be working in full force from start to (almost) finish with high energy from the entire group, with good puck movement. It started with Rasmus Ristolainen and Travis Sanheim utilizing their skillsets to move the puck up ice without much issue. The quick executions in the defensive zone first led to Claude Giroux making plays from behind the net, leaving a few rebounds open in front of the net with no one there to cash in.

After the work of the Giroux line, Kevin Hayes got his shine for a primary apple in his first game back from surgery. Oskar Lindblom created the shot from the point by keeping the puck below the goal line, edging a defender, and moving the puck to Hayes, who whipped the puck from the right circle to an open Sanheim, who did would ever hockey coach dreams of pucks on net; and it worked! Nothing flashy, a typical redirect here, but it was an Oskar Lindblom goal, and his 9th of the season.

A deflection to Marvel at.

At the 13-minute mark, the Flyers’ momentum was disrupted when Giroux sent the team to the power play after being interfered with by Connor Murphy, but they seemed to regain their footing. The second half of the period saw Chicago make their push, with a series of crafty saucer passes from Patrick Kane, but none found the back of the net. It was the dying seconds of the period that gave the flyers their biggest scare. Chicago won a set play off the faceoff in the flyers zone, and made a tape-to-tape pass to a gaping net, but Chicago defenseman Riley Stillman hit the post.

That last shot of the 1st period really served as a foreshadowing of what was to come in the second. Just 25 seconds in, Alex DeBrincat, a.k.a. say Pascal Laberge every time he scores, nipped one off a faceoff tie up from Jonathan Toews. Chicago kicked themselves in the shin not to long after the goal, getting called for a too-many-men penalty, which allegedly was an issue that plagued them from their previous matchup. Fortunately, it was against the Flyers, who didn’t do anything with it.

What was very interesting, though, was the net-front person was actually a defenseman in Ristolainen, and he had a crack at a scoring chance in front of the net but wasn’t able to swipe it pass Lankinen. It was Chicago’s period, and Dylan Strome broke his 8-game scoring drought off a signature Kane lateral feed that Martin Jones had little to no chance on.

This wasn’t going to put a halt to the Flyers just yet. After some going back and forth, Cam Atkinson and Joel Farabee connected on a beautiful give and go, reestablishing a tie 2-2 game, and allotting Atkinson with his 21st goal of the season.

Right as the Flyers began to celebrate, chaos ensued from a shoving match between Derick Brassard and Calvin de Haan, which ended with Ristolainen and Toews, and DeBrincat and Sanheim wrestling together on the ice. The roughhousing somehow led to the third Flyers powerplay, and you just knew they were going to find a way to use this to disrupt themselves. Sure enough, they did. Another lackluster power play that was all too familiar, a failed zone exit, and passive blue-line defense manifested itself into Strome’s 2nd goal of the night, and 11th of the season. The Flyers headed into the 3rd period down 3-2.

The first three minutes of the period were very slow, and it looked as if the Blackhawks were just ragging the puck. After too many lateral passes in the neutral zone, Brassard would be the next Flyer to tie things back up at 3-3. It really wasn’t a dangerous shot and looked to be a fluky bounce off of backup goaltender Lankinen that ended up squirting between his legs. This was all thanks to the great puck work along the boards by Farabee to Cam who fed the streaking Brassard for his 5th of the season and 199th of his career.

The FAB Line is reunited and connecting. #CHIvsPHI | @SeatGeek pic.twitter.com/GAtfO24yVT

Finally, about halfway through the period, all hell broke loose when the heroes of the matinee broke the tie to take a 4-3 advantage. You guessed it, it was Atkinson and Farabee, this time it featured Atkinson releasing a well-timed shot through a sea of moving bodies that no goaltender could see, unless they had superpowers or something.

2 minutes later Kevin Connauton endured a nasty, targeted hit from Kirby Dach that resulted in him leaving for the rest of the game. The Flyers responded the next shift, and an all-out brawl broke out again, with the regular guest of Ristolainen, and the unafraid but unusual suspect of Claude Giroux getting in the mix (Sanheim was also just totally rag dolling Debrincat in a corner, and I think I heard him whispering something along the lines of “why couldn’t it have been you, why did Hextall take Laberge over you!”). It was fun hockey in the Wells Fargo Center.

Chicago was given a power play with about 7 minutes left in the game, but they too really stink on the power play, so there was nothing more than a couple clears. Thankfully, the hockey gods were really looking out for the Flyers this afternoon when the Blackhawks iced 5 forwards and 2 defensemen on the ice with about 1:30 to go in the 3rd period, getting called for a second too-many-men call, for the SECOND game in a row. The Flyers extend the regular season home winning streak against Chicago to 17 games, because sometimes, good things do happen in Philadelphia.