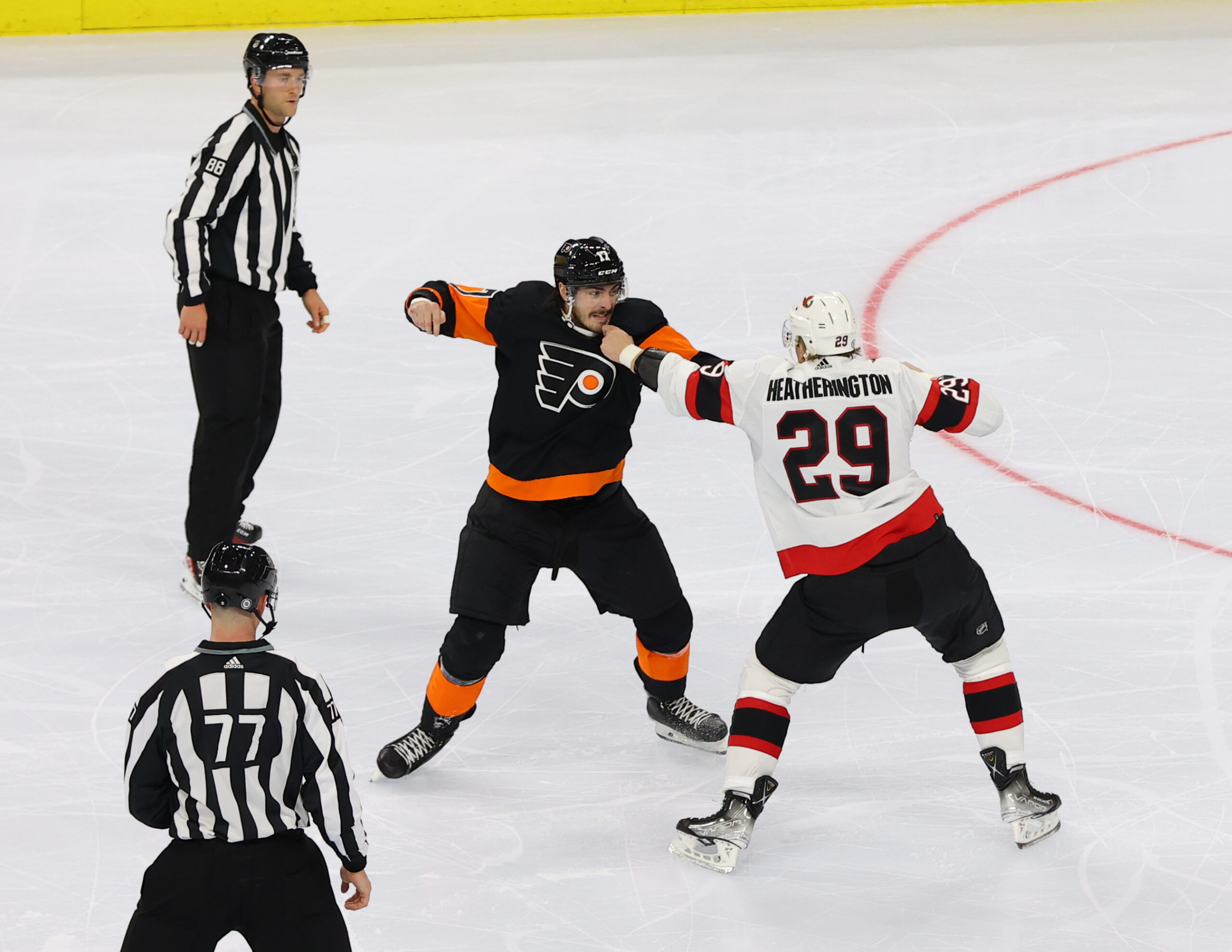 A Few Ways to Help Fix the NHL

Recently, Greg Wyshynski of ESPN and formerly of Yahoo! Sports came out with an article of why the NHL must expand the playoffs. His main reasoning is that it will increase revenue, and more revenue is good, but not at the hands of the integrity of the sport. All eight playoff teams in the Eastern Conference are going to exceed 100 points. The next closest team is the New York Islanders with 82 points. They are 18 points behind as the closest team to a Wild Card berth. There is absolutely no reason to have a play in game or playoff series between the 7th versus the 10th and 8th and 9th seeds.

In the West, it was a little closer. There were three teams fighting for the last two playoff seeds heading into last night before Dallas clinched the final playoff berth, since the NHL does award the “loser” point for overtime because they refuse to give three points for a regulation win due to the fact it will hurt all the Canadian teams’ records.

Here would by my compromise for the play-in game: if two or more teams are within 0.25 regulation point percentages and within three or less points in the standings, then there can be a play-in game. It should be used in the rarest of formats like how a penalty shot used to be in hockey. It happened about as frequent as a lunar eclipse and was the most exciting play in hockey. Now no one cares. The NHL would see a revenue increase and add excitement without letting in teams that do not deserve a playoff chance.

While I’ve proposed that, I have some more ideas as well, and here’s four more ways to fix the NHL.

Get Rid of the Hard Salary Cap

The NHL is the only major league that has a hard salary cap and guaranteed contracts, meaning the teams cannot go over the allotted salary number (unless you’re Tampa Bay, Chicago, or Montreal, kidding). There are circumventions to this like long-term injured reserve, but those are legal circumventions that have been allowed in the past. The NHL should institute a soft salary cap with an added tax of going over the set salary cap just like the NBA and MLB has. This would add to the league revenue, no team must exceed the salary cap, and the players and their agents would profit from having a hard cap per team.

This would also help the Flyers in an “aggressive retool.” The Flyers have not been the same organization since the institution of the hard salary cap after the 2004-05 NHL lockout. If an NHL team wants to spend all the money on players, let them. The quest for parity by the league officials has been holding this sport back. Who doesn’t want to see a super team in the NHL? Imagine if Edmonton could buy all the top free agent players to put next to McDavid and Draisaitl? Johhny Hockey plus Marc-Andre Fleury plus Nazem Kadri plus Evgeni Malkin and Kris Letang going along with McDavid, Draisaitl, Nurse, etc. Who doesn’t want to see them lose to a tight checking Minnesota Wild team in the semi-finals?

Toronto can’t make it out of the first round with Matthews, Marner, Nylander, Tavares, Claude Giroux, Flilp Forsberg, Phil Kessel, Andrew Copp, and David Perron as their top-nine. Without a hard cap, trading would be fun again and we could have actual blockbuster trades and not these trades that are dollar in and dollar out. Bring on the chaos, hockey is too buttoned up.

The point of this is not just allow players to drop the gloves and punch unsuspecting players. Those are penalties forever. However, since the NHL has implemented the Instigator Rule in 1992, it has led to a slow but steady increase of stick infractions and cheap play that was a go around the way of fighting.

The instigator rule is almost never called correctly. Malkin, Crosby, etc. are some of the cheapest players in the league that get away with murder because they are among the most skilled players in the league and have been for their entire careers. Watch the Nick Foligno and Evgeni Malkin fight on hockeyfights. Malkin throws about 3 gloved punches on Foligno. Now Foligno laid on him before that, but nothing egregious. Malkin does not even get a roughing minor to go along with his fighting major.

If you think I am being a Flyers homer, you are correct, but former Flyer Jake Voracek only fights when he can get the instigator. His fights versus Steve Oleksy and Rob Scuderi are the two fights I am referring to. Now did he deserve those penalties? Yeah sure. Was he illegally checked in both of the situations? Yes. Voracek answered the bell for what he thought were liberties taken by the other team. That is hockey. Bring back fighting. I can tell you that no one has not watched a hockey game and not wanted to see two grown men try to punch each other while balancing themselves on razor blades.

We don’t need the bench clearing brawls like in the 70s and 80s, but holding players accountable for their actions on the ice is something that needs to be brought back because the NHL Safety Committee certainly is not doing it. There are people who say this won’t help grow the sport and all this does is turn away people who like the product while staying static from a growth perspective. Humanity loves carnage. It worked in Rome, it works currently with boxing and MMA. Fighting is okay and has its place in hockey.

This rule has gotten some flack because the people want to see Connor McDavid, Alex Ovechkin, Sidney Crosby, etc. live and in person. People act like televisions do not exist. But I am not adjusting my change to appease those without televisions. Here is why I want no inter-conference play: rivalries. That’s it.

Let each team play their divisional opponents eighr times each (56 games total) and then they would play the opposite division the other 26 games, and I know it does not go in evenly but maybe they can just have a rotating schedule or make the season 80 games, with 56 games versus each divisional opponent and 24 games versus the other division in the conference. This means that teams would not play the opposite conference until the Stanley Cup Final. Who does not want to see Eastern Conference teams loading up on big, beefy guys like Wayne Simmonds and Pat Maroon at the deadline to go against each other? Have the opposite conference load up on speed and skill players that might be miscast on their current teams like the Tomas Tatars and Sonny Milanos of the league.

The AHL does this now to cut down on travel and expenses. Having mini-playoff series during the season would not only bring the added element of hate, but familiarity breeds contempt. While we are at it, we are also sending Detroit back to the Western Conference so they can reignite their old rivalries with Colorado and Chicago. Send Nashville or whatever city they may move the Arizona Coyotes in (either Quebec or Hartford, Houston does not make much sense to move to the East) into the Eastern Conference. Bring back the hate, bring back the rivalries and give the NHL a playoff atmosphere from Game 1 of the regular season to Game 7 of the Stanley Cup Final.

10 Minute 3-on-3 Overtime, and if the game is still tied afterwards, let the game end in a tie

Kill the shootout. Take it out back and ends the skills competition. The penalty shot used to be the most exciting play in hockey and maybe all of sports, but now it is a common boring finale to an otherwise tight individual game.

Make the 3-on-3 overtime ten minutes long and if it is still tied at the end of ten minutes, let the game end in a tie. There are some games where two teams play as good as each other and it is okay to end in a tie. There are some games where one team outplays the other team and loses. Those are the breaks. We do not need to manufacture fake ways of ending games. If you want a gimmicky way of ending hockey games, turn off offsides for the last 5 minutes of overtime. That’ll change the entire landscape of the overtime. Teams can spread players all over the ice. You want to cheat up the ice, well if it isn’t a 3-on-0 coming the other way on our goaltender.

If the NHL made at least one of these changes, especially getting rid of the salary cap, that would drive interest and there is not a soul that does not love a blockbuster, headline grabbing trade.

Will the NHL make any of these changes or a compromise of these changes? No. The lack any feel for what the consumer wants or what the sport needs. The changes that are made are in search of attracting new fans, but often leave current and long-time fans shaking their collective heads of why the sport they love is changing and not always with the times.

This could be the current Flyers team clouding my recency bias, but the NHL has been unspectacular. Baseball is extremely guilty of this. We do not need hockey to be baseball. The dichotomy of love and hate in life are at war with each other just as order and chaos are. Hockey is at its peak when there is a balance of the love for your team and the hate for the opposition.

An older, wiser man once told me that the opposite of love is not hate but indifference. The key to the future of this sport if finding that fine line of evoking the love and hate from fans and having those emotions consume their need to fill the void in their lives. Indifference just leaves everyone unsatisfied.