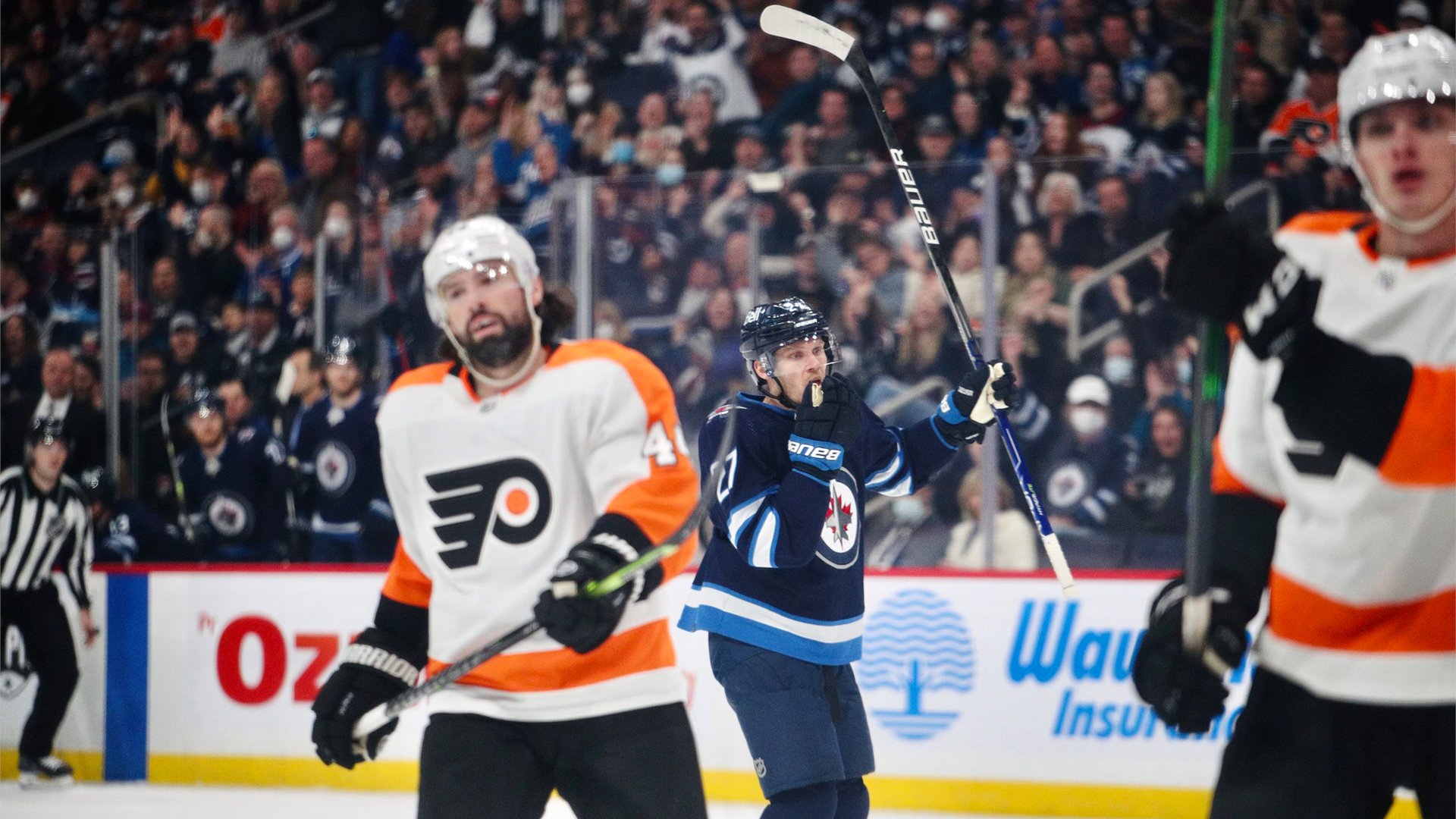 The Philadelphia Flyers lost their second straight contest and their final road game of the season tonight against the Winnipeg Jets by a score of 4-0.

As has been the case all season, an anemic power play, a not-so-good penalty kill, and a disastrous second period were the root problems of a Flyers loss. Kyle Connor scored a goal and added two helpers, while also breaking the single-season record for points by a Winnipeg Jet. Blake Wheeler and Nikolaj Ehlers each added a goal and an assist apiece, while Pierre-Luc Dubois scored the eventual game-winning goal just five minutes into the game.

Felix Sandstrom made 23 saves as he still searches for his first career victory, while his counterpart in Eric Comrie made 34 saves for the shutout.

The last road game of the 2021-22 season for the Philadelphia Flyers took place in Winnipeg, which represented their first visit there since 2019. With both teams out of the playoffs, both teams headed by interim head coaches, and the Flyers holding a .500 record against the Western Conference versus the Jets who have a paltry 10-19-3 record against the Eastern Conference, this looked like a good time for the Flyers to squeeze out one final road victory.

The Flyers, who took five penalties in their last game against the Chicago Blackhawks, were found guilty of a too many men on the ice minor only 5:13 into the first period. It only took the 15th-ranked power play ten seconds to get on the board courtesy of Pierre-Luc Dubois’ 15th power play tally of the season and 28th in total. It was a very simple play after winning the face-off as Kyle Connor and Dubois played a little give and go before Dubois made a spin-around move around the goal mouth and stuffed it past Felix Sandstrom.

Three minutes after scoring the game’s first goal on the power play, the even-strength line of Dubois-Connor-Harkins almost made it 2-0 with several scoring opportunities, but Sandstrom was able to stand his ground, diving and sprawling to keep the deficit at one.

The Flyers’ first scoring chance came 12 minutes into the period as Nate Thompson skated in all alone in the slot and fired a slap-shot that was stopped by the shoulder of Eric Comrie. After taking a 6-1 shot advantage in the early part of the first period, the Jets had issues finding their way into the offensive zone with the neutral zone being clogged up from the five-minute mark onwards. The Flyers were dealing with the same problem as it started to become a dump and chase kind of game.

With 4:14 remaining in the first period, Zack MacEwen drew a high sticking penalty after Dylan Samberg was found guilty for the infraction. In a battle of wits in the special teams department, the 32nd-ranked Flyers power play went head to head with the 29th-ranked Jets penalty kill. The Flyers weren’t able to set up, barely made their way into the zone, and dumped it in twice without being able to retrieve and chase it down successfully. The Jets actually had two scoring chances, one from Connor whose shot was blocked away by Ivan Provorov, and the second chance being a mini 3-on-1 opportunity with Brenden Dillon’s shot fluttering into Sandstrom’s chest.

Things opened up a little bit more in the final few minutes of the period with both teams pouncing on some sloppy turnovers and the Flyers finally getting some shots towards Comrie. Nevertheless, the score remained 1-0 Winnipeg with the Flyers taking the shot advantage at 9-8.

88 seconds into the second period, Travis Konecny was called for a hooking minor on Josh Morrissey, giving the Jets a golden opportunity to double their lead. Unlike their first power play, the Jets weren’t able to do much of anything outside of one shot from Adam Lowry that missed the net. After a few good shifts from the Flyers after their penalty kill, Ronnie Attard was called for a hooking minor 5:52 into the period. Seven seconds into the Attard minor, Neal Pionk was high-sticked by Ivan Provorov, giving the Jets a 113 second 5-on-3 advantage.

After a few attempts to set up in the offensive zone, the Jets finally found their groove with Connor just missing the net, Nikolaj Ehlers hitting the post, and Blake Wheeler getting stopped by Sandstrom. As the Jets were warming up, with 19 seconds left on the two-man advantage, Connor set up Ehlers, who snapped a shot that went through the arm of Sandstrom for his 28th of the season as well.

Coming out of the second commercial break, the Flyers found themselves on the power play after Zach Sanford was called for a slashing minor. Travis Konecny tried a similar move to Dubois’ goal with a nice net-front move and a shot through his legs but Comrie was square to the shooter and thwarted that opportunity. Kyle Connor then stole the puck along the boards near the blue line and wired his snapshot just wide of Sandstrom as he came real close to his 46th goal of the season.

With 4:45 to go in the second period, Jets captain Blake Wheeler added to the Flyers’ misery by scoring the third goal of the game after being perfectly set up by Ehlers. Nate Thompson’s pass to Keith Yandle at the point tripped him up because he couldn’t handle the pass at all. Ehlers scooped up the loose puck, skated his way into the Flyers’ end, and found a streaking Wheeler for an easy one-touch goal through Sandstrom’s five-hole.

With 22 seconds left in the period, Jansen Harkins was called for a tripping minor after getting his stick in between the skates of Joel Farabee. The Flyers didn’t have much time to work with the period coming to a close as they still had 1:38 left to work with. The Jets, however, took advantage of the worst second period team in hockey by depositing two goals to add to their lead. After two, the shot totals remained tight as both teams were tied at 19 apiece.

To start the third period, the Flyers had a few golden opportunities to break the potential shutout. With the power play coming to a close, Bobby Brink found Kevin Hayes in the slot with a nifty pass and even though his shot was blocked, it found its way into the blue paint but the referee lost sight of the puck and blew the play dead, just as Konecny found the loose puck. A couple shifts later, Owen Tippett made a couple dazzling moves and ripped a hard shot from the slot but Comrie came up with the save again.

The Flyers started the period with a flurry in an attempt to break Comrie’s shutout, but to no avail as they fired five shots that were stopped in the first few minutes. After that, the play died down with the Jets holding a three-goal lead. The neutral zone was clogged again and lots of dumping and chasing with an eye on the clock was happening to run things down. With a little over five minutes to go in regulation, Thompson was called for a slashing minor as the Jets were about to embark on their fifth power play of the game.

With 2:40 remaining in the third period, Josh Morrissey was called for a holding minor with the Flyers needing something of substance to break the shutout. With a little over two minutes to go, Mike Yeo pulled Felix Sandstrom for the extra attacker. The Flyers fired several shots on goal, a few from Joel Farabee alone, but Comrie shut them all down.

With 1:13 remaining in regulation and 33 seconds on the power play, head coach Mike Yeo called a timeout, all for the Flyers to lose the face-off. With the net still empty, Kyle Connor scored his 46th goal of the season and broke the Winnipeg Jets’ single-season record for points with his 92nd after forcing a turnover off a Konecny pass with 37 seconds left.

The Flyers close their season out on Friday night when they host the fellow bottom-feeder Ottawa Senators at Wells Fargo Center.