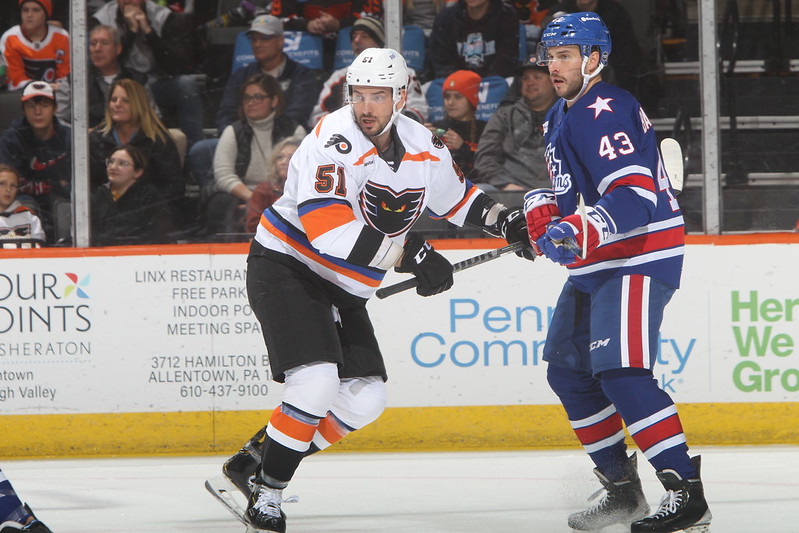 The Philadelphia Flyers aren’t winning much, but at least the Lehigh Valley Phantoms are giving us something to cheer for – even though they generally get forgotten, being the Flyers’ little brother. The Phantoms currently sit 6th in the very tough Atlantic Division while sporting an 8-6-1-1 record for 18 points in 16 games.

The Phantoms have a lot of great teams to fend off in the coming weeks as the Providence Bruins sit at the top of the division with a 12-2-3-2 record, following by the Hershey Bears with a 13-4-2-0 record, the Bridgeport Islanders with an 11-3-4-0 record, the Charlotte Checkers with an 11-5-2-1 record, and the Wilkes Barre/Scranton Penguins with a 10-5-1-2 record. The Springfield Thunderbirds have the same amount of points as the Phantoms but have played 3 more games, and then the Hartford Wolf Pack round out the division with a 5-7-1-4 record.

Fortunately, the Phantoms hold games in hand with all their rivals as they try to steady the ship and climb up the ranks.

Lehigh Valley is coming off a dominating performance on Saturday after taking down the Rochester Americans 5-1. After giving up an early goal, the Phantoms scored the final 5 courtesy of Tyson Foerster, Artem Anisimov (2), Olle Lycksell, and Elliot Desnoyers. Nolan Maier won his first game of the season making 14 saves along the way. The Phantoms outshot the Americans 40-15, Lycksell recorded 4 points, and the power play was a perfect 2/2.

Up next for the Phantoms are the Bears tonight in Allentown, and then the Checkers on the 2nd and 3rd of December, the Wolf Pack on the 7th, and then another back to back with the Checkers but this time on home ice on the 9th and 10th of December.

On the season, Tyson Foerster and Cam York lead the team with 12 points in 16 games, Lycksell is right behind them with 11 points in 10 games, then Desnoyers with 9 points but a team-high 7 goals, Ronnie Attard with 9, Garrett Wilson with 8, and Jackson Cates, Louie Belpedio, and Cal O’Reilly with 7 each.

Desnoyers has 7 goals, Foerster has 5, Attard and Cates have 4, and York, Lycksell, and Wilson each have 3. York leads the way with 9 assists, Lycksell is right behind him with 8, Foerster with 7, and then there is a 5-way tie between Belpedio, Attard, O’Reilly, Wilson, and Jordy Bellerive with 5 assists.

Other notables include Adam Ginning, who has no goals and 2 assists in 14 games but has a team high +6 rating, Isaac Ratcliffe has 2 goals in 15 games, and Zayde Wisdom has 4 assists in 16 games. Artem Anisimov, who could very well be the next call-up to the NHL, has 2 goals and 3 points in 4 games.