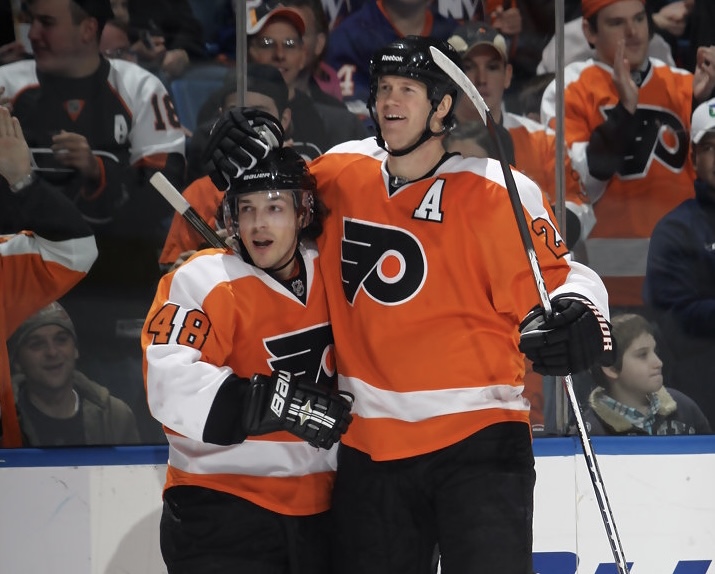 Back when the NHL was rolling with their normal schedule before COVID and the pause shook the sports world, the end of June was an exciting time with the NHL draft, buyout windows, and free agency about to open up a week after the draft. Fast forward to the summer of 2022 and the Stanley Cup Final has just ended with the Colorado Avalanche winning their third in franchise history, the draft is set for the 7th of July, and the free agency window is set to open up on the 13th of the same month.

Back when things were rolling as status quo, the Flyers made some noise on this day in history when they decided to buy out goaltender Ilya Bryzgalov and playoff hero Daniel Briere in 2013, and then once again making a minor trade but one of relevance in Chris Pronger’s contract being shipped out to the Arizona Coyotes alongside Nicklas Grossmann for Sam Gagner in 2015.

At the end of the 2012-13 season, the Flyers had slumped to a 23-22-9 record during the lockout shortened season, Ilya Bryzgalov had struggled yet again – so much so that it was a foregone conclusion that he would be bought out at the end of the season – Claude Giroux paced the team with 48 points in 48 games, and Daniel Briere slumped to the tune of 6 goals and 16 points in 34 games. Briere, who came off the heels of 30 points in 23 games during the postseason run of 2010, added 34 goals and 68 points in 77 games the following year before beginning his downward spiral that led to his buyout. In 2011-12, Briere dropped to 16 goals and 49 points in 70 games, but did keep up with his clutch playoff moniker as he paced the Flyers with 8 goals while adding 5 assists in 11 games.

Briere was the big fish the Flyers nabbed in the summer of 2007 after finishing in dead last the season prior. It was a huge offseason for the Orange and Black as they signed Briere to an 8-year deal that was worth $52 million, as well as trading for the rights of Kimmo Timonen and Scott Hartnell and then subsequently signing them to 6-year deals. Briere had 2 years left on his contract, however with a cap hit of $6.5 million and with his performance not living up to the contract anymore, the Flyers exercised one of their two buyouts. The terms of his buyout were four years, $3.33 million.

The Flyers were always big spenders and heavy dealers and the summer of 2011 was no different as they signed Ilya Bryzgalov to a mammoth 9-year deal that was worth $51 million. To fit his massive contract, the Flyers shipped out Mike Richards and Jeff Carter, which were seen as franchise-altering moves. Goaltending seemed to be the issue during the playoff run in 2011 as the second seeded Flyers took the Buffalo Sabres to 7 games and then got swept by the Boston Bruins a year after completing the historic reverse sweep. Sergei Bobrovsky didn’t look sharp in his first playoff run and Michael Leighton and Brian Boucher didn’t look any better, so the Flyers decided to swing for the fences in setting up a Russian tandem. Bobrovsky was not too keen about the current setup after having a pretty good debut campaign and gave the Flyers an ultimatum of either trading him or making him the number one goaltender. Of course, with all the money they threw towards Bryzgalov, they couldn’t comply to his demands so they traded him in the summer of 2012 to the Columbus Blue Jackets for a second round pick and 2 fourth round picks.

Meanwhile, Bryzgalov only lasted 2 full seasons with the Flyers, making the entire process a complete failure. In 2011-12, he compiled a 33-16-7 record with a 2.48 GAA and a middling .909 save percentage. He was doing very well heading into the month of March, where he collected 4 shutouts in a span of 5 games and then added 3 consecutive games with a save percentage of .935% or higher. The playoffs were a different story as the wheels came off during a very high-octane first round matchup against the Pittsburgh Penguins. In the 6-game series, Bryzgalov posted a 4-2 record but posted a .871 save percentage and allowed 21 goals. The Flyers’ offense carried them through into the second round, where they faced off against the always-stingy New Jersey Devils but after winning the first game in overtime, the Flyers lost the next 4 in rather disappointing fashion. Bryzgalov allowed 16 goals in the 5 games and carried a .902 save percentage.

The Flyers were hoping for a bounce-back campaign in 2012-13 but Bryzgalov and the Flyers just couldn’t find that consistency, and in the end it spelled the end for Bryzgalov in Philadelphia. He finished the season going 19-17-3 with a 2.79 GAA and a .900 save percentage. The acquisition of Steve Mason at the trade deadline was seen as a passing of the torch as Mason started more games near the end of the season than Bryzgalov. The buyout window was a busy one for the Flyers as they used their second one on Bryzgalov and it was a big one as the terms of his buyout were 14 years, $23 million. Bryzgalov’s tenure will also be remembered for his comments on the galaxy and the universe during the filming of HBO’s 24/7 series, telling the media the “good news” that he wouldn’t be starting during the Winter Classic game, and the “even better news” that they stood a chance to win now, and his body language towards his teammates on and off the ice. Both Briere and Bryzgalov were informed prior to the opening of the buyout window, which was on the 27th of June, 2013.